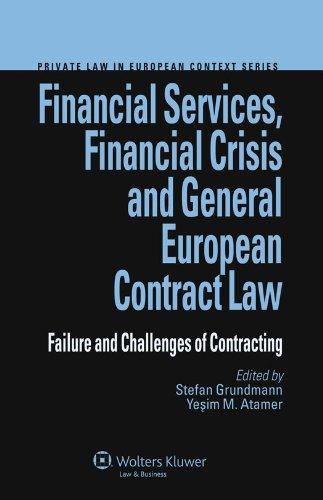 Speculation is rife on the origins of the worldwide financial crisis of 2008, with a preponderance focusing on alleged shortcomings in corporate governance. This book offers a distinct yet complementary perspective: that the most useful path to follow, if we want to understand what happened and forestall its happening again, is through an analysis of contract relationships–specifically, banking contracts entered into in the financial services sector, considered under the rubric of contract law rather than company law.

In this book thirteen noted scholars, recognizing that modern contract law must take into account global markets and risks, consider banking contracts within networks and within mass transactions. Always attending to the long-term relationships that characterize financial services contracts, they focus on such cross-sector issues as the following:

rule-setting and the question of who should best regulate and at which level;
networks of contracts as the backbone of a market economy;
the complex interplay between market regulation and traditional contract law;
avoiding erroneous assumptions about the future development of prices;
the passing on of the risk via securitization;
rating relationships affected by conflicts of interests;
remuneration problems;
core duties of information and advice in an agency relationship in services;
fiduciary duties of loyalty and care;
types of clients and level of protection;
differentiation in information available on various markets; and
the question of enforcement.
The authors analyze the full body of second generation European Banking Contract Law and show convincingly that the world financial crisis has proceeded at least as much from contracting as from corporate governance. This vantage point promises to open new ways to approach this most crucial of contemporary problems, and will be of great interest to all professionals examining the role played by financial services in market crises.

This book is based on the tenth annual conference of the Society of European Contract Law (SECOLA) which took place in Istanbul in June 2010.