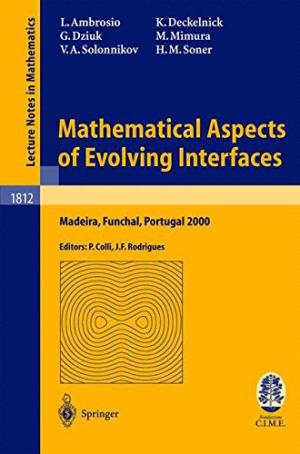 Interfaces are geometrical objects modelling free or moving boundaries and arise in a wide range of phase change problems in physical and biological sciences, particularly in material technology and in dynamics of patterns. Especially in the end of last century, the study of evolving interfaces in a number of applied fields becomes increasingly important, so that the possibility of describing their dynamics through suitable mathematical models became one of the most challenging and interdisciplinary problems in applied mathematics. The 2000 Madeira school reported on mathematical advances in some theoretical, modelling and numerical issues concerned with dynamics of interfaces and free boundaries. Specifically, the five courses dealt with an assessment of recent results on the optimal transportation problem, the numerical approximation of moving fronts evolving by mean curvature, the dynamics of patterns and interfaces in some reaction-diffusion systems with chemical-biological applications, evolutionary free boundary problems of parabolic type or for Navier-Stokes equations, and a variational approach to evolution problems for the Ginzburg-Landau functional.