*Description
The workshop is mainly targeted towards advanced graduate students and early post-docs studying evolutionary theory, evolutionary genetics or evolutionary genomics. However, we also accept a limited number of more experienced researchers in these fields that can share their knowledge with the students and that are open to collaboration with the scientists in the workshop.
The main body of the workshop will consist of keynote lectures (see above), and group projects developed by students under the supervision of young scientists. There will also be various short lectures and seminars during the workshop.

*Application deadlines
Early: April 22, 2014 (recommended as the number of attendees and fellowships are limited)
Late: June 15, 2014 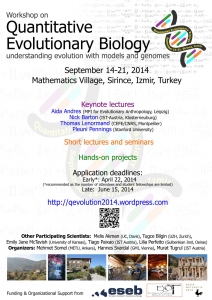